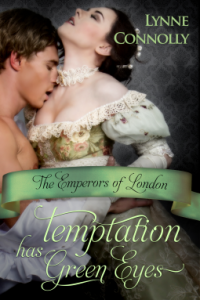 I really wanted to like this book.  Lynne Connolly has been on my radar for a long time, but for some reason I never tried one of her books before.  When I got an ARC of Temptation Has Green Eyes from Netgalley, I was excited.  This book has everything I want in a romance novel, so it was a guaranteed win, right?  Wrong.  There’s an overarching conspiracy involving Bonnie Prince Charlie and the Jacobites, and to make it even more…tempting…it even takes place in a time period that I haven’t seen very much in romance novels.  Both are big plusses in my book, but for some reason it just didn’t work.  Beware: spoilers below!!!

There’s more to love than meets the eye…

The daughter of a wealthy merchant, Sophia Russell has no interest in marriage, especially after a recent humiliation—and especially not to Maximilian, Marquess of Devereaux. But it’s the only way to save herself from fortune hunters—and those who wish to seize a powerful connection she prefers to keep secret—even from her future husband…

Marrying Sophia is the only way Max can regain the wealth his father squandered on an extravagant country palace. And while Max and his bride are civil, theirs is clearly a marriage of convenience—until a family enemy takes a questionable interest in Sophia—one that may lead all the way to the throne. Forced to become allies in a battle they hadn’t foreseen, the newlyweds soon grow closer—and discover a love, and a passion, they never expected…

Honestly, based on this, I’m not even sure what made me want to read this book.  It sounds just like every other historical romance that I read in the last year.  If only.  This book was NOTHING like anything else I read last year, but not in a good way.

First, there is the hero, Max.  I couldn’t stand him.  He wants people to think of him as a good guy because he wants to give his mother her “palace” back and because he abhors men who use violence on women, but he seemed rather smarmy at times.  For instance, on the night he and Sophia decide to marry, he thinks about how Sophia’s ex is a creep because he tried to force himself on her, which is a good thing to think considering, but ruins it by forcing a kiss on Sophia.

[W]hen he touched her, she clamped her lips together.  He was in no mind to force her.

Her body stiffened so much…but he wanted to taste her.  Sweet, so sweet, that even a closed-mouth kiss pushed his arousal up another notch.

How is it that he could go from not wanting to force her to kiss him to doing so anyway?  In this instance, it isn’t the thought that counts, but the action.  He knows that she’s been sexually assaulted in the past, but still decides to (1) kiss her and (2) continue when it is obvious that she does not want to be kissed.  Is this supposed to make me like him?  I don’t get it.  If this was the only time, Max displayed this type of behavior, I could probably overlook it, but it isn’t, so I can’t.

The second problem I had was with Sophia’s father, who supposedly loves her, but treats her like a child–no, worse, a prisoner.  The book starts out with her father selling her to Max as part of a deal.  Sure, this was done a lot in the time this book takes place, but it isn’t something that I want to see.  Maybe I’m jaded by all of the families in Julia Quinn and Candace Camp novels that give their daughters the freedom to choose their suitors.  I don’t know.  It just didn’t sit right with me and for a little while, it seemed as if it didn’t sit right with Max either–but just for a little while.

Not long after this, we find him ordering Sophia to marry Max and punishing her when she refuses:

He ordered her to stay in her room and had her fed on bread and water.  That hadn’t happened since Sophia’s childhood.

He also had her maid remove her books and writing materials, except for a copy of The Bible.  ‘To give you a chance to reflect on your decision and pray for the correct outcome,’ the note he sent told her.

This is nothing more than a set-up for brainwashing.  Remove anything she likes and give her enough time, so she’ll do what you want.  Lovely person.

Last, there is Sophia.  I really really wanted to like her, but I just couldn’t do it.  I had such high hopes for her, too, since she did stand up to her father when he first ordered her to marry Max, but she quickly gives in.  I don’t blame her for this because of how her father treated her.  The reason I can’t like her is that she has no clue what she wants.  It’s obvious that she is attracted to Max, but she pushes him away.  She doesn’t want to have sex with Max and she hated the experience the first time they slept together, but she also wants him to come to her at night.  I know that it’s a woman’s prerogative to change her mind, but this is ridiculous.

I got about four chapters into the book before deciding to give it up and I fear that the only reason I read that far is because it was an ARC.

Temptation Has Green Eyes will be published on February 3, 2015 and is available for pre-order on Amazon, BN, Kobo, and iBooks.