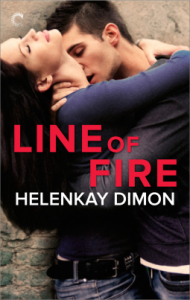 I’ve heard a lot of really great things about HelenKay Dimon’s books, so when I saw this book on Netgalley, I jumped at the chance to review it.  I really wish that I looked before I leaped.

Molly Cain has been attracted to Jason McAdams since she was a kid, but the timing has never been right.  Jason has done everything he could to stay away from Molly because she’s his best friend’s sister and he believes that she deserves better than him.  Presented with the idea that Molly might have given up on him, he decides to grow up and be the man she needs him to be.

First, I want to say that I don’t understand what the title has to do with anything.  It looks like romantic suspense, but at 50% I haven’t encountered anything associated with that sub-genre.  To say, I’m confused and disappointed would be an understatement.  Publishers, please do not give books titles that connote one thing when being something completely different.

The first red flag I got about Line of Fire came from the prologue, which felt as if I was being dropped into a story in progress.  I was aware that this was part of a series in progress, but most of the time that just means that the protagonists in this book know the ones in previous books not that they were a sub-plot in the earlier one.  That’s exactly what I think was going on here and I think that this is how most of Ms. Dimon’s series play out based on how another couple seem to be taking up a good portion of this one.  If I knew about this from the beginning, I would have found the first book before jumping into this one.

My biggest issue with this book is Jason.  He seems to think that he should get a pat on that back for giving up his man-whore ways for 3 weeks.  Until that point, he had a revolving door of women leading to his bedroom.  The only reason he decided to change was because he wants to prove to Molly that he’s not that guy despite being that guy for his entire life.  I’m sorry, but Jason is not a good bet.  He’s barely stopped his destructive ways (promiscuity is not his only issue) and he’s still not sure what he wants out of a relationship with Molly.  He knows that she can’t be another one in his string of women, mostly because her brother is his best friend.  If it wasn’t for Sawyer, I don’t know if Jason would be so “gallant” when it comes to Molly.  I don’t for a minute believe that he would have given up casual sex with random women if he thought that Sawyer wouldn’t have killed him for treating his sister like that.  Not something I want in a hero.

I also had an issue with Molly.  How a reasonably intelligent woman could think she’s in love with that mess of a man is beyond me and makes me wonder just what is going on in her head.  When the book starts, she’s decided that she’s done with Jason and that’s probably a great decision.  However, just one encounter with him later and she’s already questioning her ability to stay away from him.  I get it.  He’s hot and she’s known him forever.  That doesn’t mean he’s worthy of her time.  He’s already broken her heart several times in the last decade or so since he was legally able to play with her heart (he was into her when she was just a teenager).

There was one thing that I really liked about Line of Fire and that was the fact that Molly and Jason had a real conversation about what his past sexual relationships could mean for his physical health.  She even demands that he get tested for various STD’s to make sure that he doesn’t pass along any diseases to her.  That’s wonderful.  I wish more heroines had the nerve to do that.  I just wish that this conversation didn’t happen in the middle of a sex scene.  Talk about a mood killer.  This is a conversation that definitely needs to happen, but there must be a better place for it to be done.

In that same vein, I also liked the fact that so much attention was paid to the fact that they were using a condom.  In most books, I think we’re supposed to just assume that they’re being safe.  I think this is because authors are afraid that stopping to put on a condom will kill the mood faster than thoughts of one’s mother.  That’s ridiculous.  If stopping for a condom doesn’t kill the mood in real life, it isn’t going to do that in a book either.

I was totally planning on finishing this book, but each time I went to pick it up this weekend, I would decide to do something else.  I just was not motivated to pick up my Kindle and dive back into the lives of these characters.  DNF

Line of Fire is currently available for Pre-Order and will be released on October 26th.