Home abortion Video of the Day–Hear Me Roar

What a day.  Yesterday morning, I started my day listening to The History Chicks podcast about Elizabeth Cady Stanton, an awesome woman, who fought for women’s rights for most of her life, dying 18 years before women finally won the right to vote–a right that white men never had to struggle to achieve.  It was handed to them on a silver platter.  From the day they were born, they were told that they mattered and that they could do whatever they wanted to do.  So long as they were white and owned property, they were good as gold.

Women getting the right to vote?  That scared men.  Women couldn’t vote.  They weren’t smart enough.  Well, I wonder why they would think that.  Could it be because we weren’t allowed to go to school?  We had to be the doting housewife, bound to the house and the children for our whole lives.  We had no choice.  This was what women were here for–to take care of their husbands, have baby after baby no matter if we wanted them, cook, clean, and make sure the house was spotless in case company unexpectedly showed up at our door.

Underneath it all was the fear that women wanted to take their rights away.  We’d turn around and make them do all the things they’d done to us because that’s what they’d do.  Obviously, this isn’t all men.  There are some outstanding men, who are totally supportive of women and there always were.  Unfortunately, it seems like there are fewer and fewer of them, especially in states like Oklahoma, where women have once again been stripped of their right to choose.  Women have been told once again that they don’t know enough about their own bodies to make the right decision regarding what is done to it.  That’s utter bullshit and we all know it 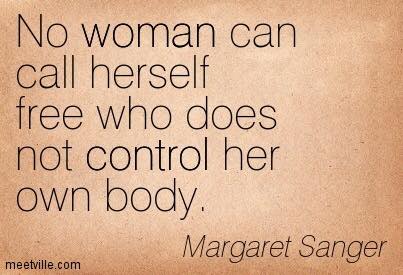 Our mothers and aunts fought hard for the right to control their bodies.  We thought this was over.  Roe v. Wade was 44 years ago.  FORTY-FOUR YEARS.  We didn’t have to worry about going to jail for aborting a baby.  We didn’t have to worry about unlicensed doctors with rusty knives cutting into us in some alley because real doctors weren’t allowed to perform the abortion.  That scene in Dirty Dancing when Baby runs to her father because Penny is bleeding?  That was just something that happened in the long ago past.  It wasn’t something that would ever happen again.  I guess we were wrong because that’s exactly what is going to happen to the women that can’t afford to cross the state border–the women who can’t afford to take a day off of work and get a hotel room in an unknown city where they’re cut off from their support system.

It is ridiculous that we have to fight this battle again and we’re not going to take it.