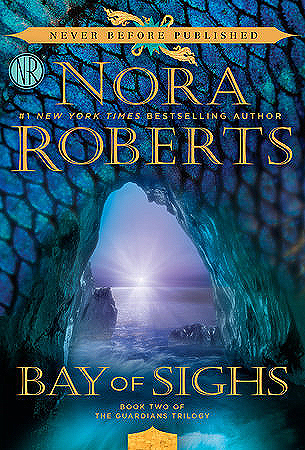 A couple of months ago, I volunteered to read Stars of Fortune, the first book in Nora Roberts’s Guardian Trilogy for the Smart Bitches RITA Reader Challenge because ParaNoras are my crack.  If they were illegal, I’d be serving a life sentence for possession/intent to sell a controlled substance.  Unfortunately, I wasn’t a fan of book 1, but I’d already requested Bay of Sighs, so I felt the need to read it too.  Plus, I liked the idea of a mermaid heroine — one whose name was not Ariel.  I really wish I resisted reading this.  It was awful.  It took everything I hated about SoF and magnified it to the level that I wasn’t able to finish it.

Annika is a mermaid, sent to “the shore up above” to stop an evil goddess from getting the Stars of Fortune.  Together with the five other guardians, she must search for the stars and protect them.  Afterwards, she must return to the sea, which wouldn’t be a problem if it wasn’t for Sawyer King…

Sawyer has been infatuated with Annika from the moment she walked out of the sea and into his life.  She’s gorgeous and fun and everything he ever wanted.  Of course, he can’t let him get distracted from his mission — he’s been searching for the Stars for what seems like his entire life, traveling through time and space, hoping to one day find them.

Sawyer, Annika, and the other Guardians have their hands full keeping the Stars safe, but now they’ve got a new problem.  Their nemesis has lured in another person — a man with no morals — to aid her in the quest.

I had so much hope for this book.  I loved the idea of a mermaid and a time traveler — Ariel + the Doctor?

With the Kindle version, which is priced at the ridiculous amount of $11.99, I’d basically have just been throwing my money at Nora.  Throwing it.
Thankfully, I got my copy through Netgalley, so it was free.  Do you guys remember seeing those pictures of Germans post-WWI using their Deutsche Marks as kindling?  That’s basically what I’d have been doing if I’d paid for this piece of crap.
One of the problems I had with this book was the way Annika was written.  She comes off very naive –very young.  Almost child-like from time to time.  Sure, she’s from another world, but she’d been around the other guardians long enough to understand that there are certain things that aren’t supposed to be done.
I’d also hoped to learn more about both Annika and Sawyer’s lives, specifically what it is like to belong to a world so different from my own.  Annika’s life was under the sea.  Was it all seashell combs and Earth debris like in The Little Mermaid?  What was her mer-society like?  Was it a Patriarchy or a Matriarchy.  Unfortunately, in the portion of the book I was able to get through, none of this is explained.  All we get is more of Annika’s other-ness.  We get the fact that she doesn’t understand that setting the table doesn’t mean stacking the plates, cups, silverware, etc. on top of each other to make some odd structure.  I guess this was supposed to make her cute, but all it did was make me annoyed with her.  Bitch, that shit costs money.  Not everyone has a pouch full of money that people dropped into the oceans for the last 1,000 years.
Then, there’s Sawyer.  If you’ve read the first book, then you know that he’s a time traveller and uses an old pocket watch to guide him to his destination.  As time travel is one of my favorite tropes, I’d love to know how this particular version works.  Unfortunately, I don’t think Sawyer knew how it worked, so I doubt I’d have found out even if I finished reading.
My biggest issue is not with this book in specific, but with the series in general — it feels more like a rehash of some of Nora’s older books, particularly The Key Trilogy, which if you haven’t read it, is almost identical in premise: three women are chosen (literally “into each generation”/Buffy-style) to find three magical keys and must keep them away from an evil goddess.  The only real difference between the two series is that the men were not chosen in the Key novels and they were in this series.
I get that NR has been writing professionally for more years than I have been alive, but it seems like she’s run out of fresh plots and is just putting plot points from her older trilogies into a hat and pulling them out one by one until she’s got enough for a series.  That’s no way to write — or at least it isn’t a way to keep your fans.  Sure, some might continue to read for awhile because they’re seeking the magic her older books possessed, but it won’t be long before they’re no longer willing to push aside those feelings of disappointment.  What pisses me off is that I’m not sure if I’ve reached that point.  I might not be strong enough to resist the final book in this series because Nora has been a part of my life since I was 15 years old — and it isn’t easy to just end a 15 year long relationship.
DNF