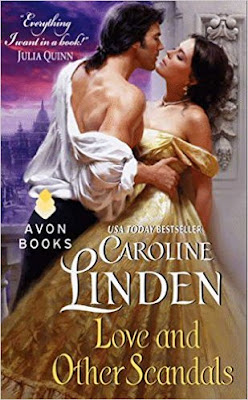 After I found out I had a bit of extra book spending money thanks to the Apple Settlement last week, I took a look at my wishlist (i.e. my “Want to Read” shelf on Goodreads) and immediately zeroed in on Love and Other Scandals by Caroline Linden.  I’d heard quite a bit about the Scandal Series and this book in particular, and unfortunately, that ended up being part of the problem.

Joan Bennet was a properly raised young lady in Regency England and at 24, she was almost a spinster.  She was tall, plump, and not at all fashionable.  No one ever wanted to dance with her and so she rarely had fun at any of the balls her mother shepherded her to and from.  One of the few things she enjoyed was reading a scandalous pamphlet detailing the sex life of Lady Constance and her many lovers.  Then, she meets Lord Burke.  He’s tall and handsome, and most of all he’s a complete rake, who could teach her everything she wants to know about being wicked.

Tristan, Lord Burke, does not like Joan Bennet.  She’s a fury — one that looks like an upside down umbrella.  But she’s got a quick wit and soon Tristan finds himself falling for her.  He’d never imagined himself as the marrying kind, but when it comes to Joan he’d be willing to do anything.

I don’t want to give you the impression that I did not like LaOS because I did.  Ms. Linden’s writing is crisp and the dialogue is witty.  The characters were fun and likable.  None of that was a problem.  No, the problem was the way this book was marketed.  It was basically touted as being 50 Shades for the historical set, which it most definitely is not.  This is directly from the Amazon description:

“Joan Bennett is a breath away from being a spinster. She’s had four seasons without a suitor. After reading a shockingly sensuous book, Fifty Ways to Sin, Joan decides perhaps it’s time to stop being proper and start being sinful, while she’s still young enough to enjoy it. And what better partner than her brother’s drinking mate, Viscount Burke? He seems the type to know how to give a lady a lascivious adventure.”

This description makes it seem as if Joan sets out to have an affair with Tristan because she enjoys reading 50 Ways to Sin.  This is not the case.  Yes, the 50 Shades knock off is involved in the plot, but just barely (basically, Joan gets Tristan to buy it for her from a shop, but he doesn’t even know what it is until the very end of the book!).  There is no proposition made.  Joan never approaches Tristan about a “lascivious adventure” and for his part, he doesn’t offer one until about 70% of the way through the book.  Once I adjusted my expectations and decided to pretend I’d never read the description, I was finally able to enjoy the rest of it — at least to some extent.

Like I said, I liked both Joan and Tristan.  Their chemistry was pretty off the charts, but their characterizations were a bit inconsistent.  Take Joan, for instance, she’s read many an issue of 50 Ways to Sin and at times she seems to know a lot about what exactly goes into relations between a man and a woman, but then at other times she is just as naive as every other Regency romance heroine.  As for Tristan, he’s supposed to be a hardened rake, sleeping around, drinking, carousing — everything an historical bad-boy is supposed to be, but aside from the first chapter when he answers the door without a shirt on, you never see this.  I don’t know if he is supposed to be an alpha, but the more I read the more I felt he was a beta hero.

The dialogue, while most of the time was fun and well written, some of it was downright odd.  Take this quote for instance:

“It knows no reason, no caution, no restraint, only that you make it rise, hard and furious, every time you simper at me or deliver a stinging set down or cling to my arm because you fear the ballroom is about to crash” (Kindle Edition, Location 3770)

Yes, this is Tristan talking to Joan about his massive (apparently) erection while having sex for the first time.  I don’t know any guy that would go on and on like this, especially when he’s got a willing woman waiting for him to do some very wicked things to her.  The bigger issue is that this didn’t even sound like Tristan.  He didn’t speak like that in any other part of the book, but all of a sudden, he felt the need to wax poetic about his dick and all the things that Joan did that made it do a happy dance in his pants.  It seriously did not make sense.

From the other reviews I read, LaOS is not representative of Ms. Linden’s other books, but I tend to be gun shy when it comes to books and I’m not likely to forgive an author of a bad book when that author is new to me.  Maybe I’ll try another Caroline Linden book, but it probably won’t be for a very long time.