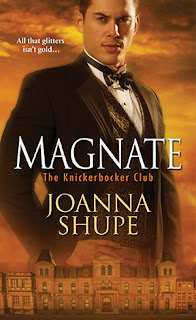 The first thing that intrigued me about Joanna Shupe’s Knickerbocker Series (other than the fact that Knickerbocker is the full name of the New York basketball team) was that it took place in Gilded Age New York.  I remember reading about that time period in both my high school and college American History classes and through the 21st century liberal gaze, I saw that period as rivaling our current economic situation (which is true in some respects and utterly false in others).  This alone was reason enough for me to check out this series, but seeing as the hero of Magnate is one of those figments of the GOP’s collective imagination — the self-made man, who struggled out of the slums of Five Points and made his way into the boardrooms and ballrooms of Manhattan (of course, this description is the true difference between the late 19th Century and today, the fact that a boy from the slums actually can become a millionaire) — my finger deftly pressed the “Buy with One Click” link on Amazon and I found myself the new owner of the first full novel in the Knickerbocker Series (the actual first book of the series is Tycoon, a novella, which should have been a full novel).

Elizabeth “Lizzie” Sloane grew up in the gilded ballrooms of Manhattan society, splitting her time between New York City and Newport, but she never really fit in with the rest of her peers.  She was no more comfortable hanging out with Alva Vanderbilt than she would be sitting with President Cleveland.  Her life bored her.  She didn’t want to go to parties and be some man’s trophy.  No, what she wanted was to open her own investment firm, but her brother, Will, wouldn’t allow it.  Their blood was too blue, too pure to do something so common.  Not to be deterred, Lizzie set her sights on her brother’s friend, Emmett Cavanaugh, a ruthless businessman, who had risen from an impoverished childhood to be one of the richest people in the country.  What was the worst that could happen?

Emmett Cavanaugh didn’t have the time to deal with blue blooded socialites, but when he learned that Elizabeth Sloane wanted to meet with him, he needed to know why.  Although he had money, they did not travel in the same circles and he knew her brother would not approve of her even being in the same building as him, especially if that building happened to be his home.  Elizabeth quickly surprises him by asking for his help — she wants him to help her open up an investment firm.  He’d be the public face of the company while she’d be the brains behind it.  It couldn’t be done, of course, but that didn’t mean he couldn’t have some fun with her first.

Before reading Tycoon, I’d never heard of Ms. Shupe, and as my long time readers are aware, I don’t tend to pick up new-to-me authors, but for some reason I gave her a shot.  While I enjoyed Tycoon, it was much too short to do the plot justice.  However, I was interested enough in the other members of the Knickerbocker Club to seek out its sequel.  (Currently, only Tycoon and Magnate are available.)

As a whole, the series is about four powerful men, Theodore “Ted” Harper, Emmett Cavanaugh, Will Sloane, and Calvin Cabot.  Each man is involved in one of the major businesses of the Gilded Age — Ted owns a large, national bank, Emmett runs East Coast Steel, Will is in charge of Northeast Railroad, and Calvin is the publisher of one of the country’s largest newspapers.  Tycoon covered Ted’s story and Magnate is Emmett’s.

As a character, Emmett was intriguing.  He came from a very poor background in which he had to struggle just to get by.  Five Points, immortalized in The Gangs of New York, was not an easy place to grow up and Emmett had to see to the safety of three siblings.  His personality is very much influenced by how he lived and this makes him different from most romance novel heroes, who are usually the bluest of blue bloods and who have never had to struggle for anything in their lives.  What I liked about Emmett was that despite his rough upbringing and the things that he’s had to do to become one of the most powerful men in New York City, he is a good man — not that he would ever see himself that way.

Lizzie was also interesting, although she more closely resembles the archetypal romance novel heroine.  She’s rich, pure, and spunky.  She’s had everything given to her on a silver platter, but isn’t satisfied with the life that the men in her family have always envisioned for her.  This is definitely the current trend, even if women of that time would have been as likely to do anything about that dissatisfaction as Beyonce releasing a country album.

One of the best things about this book is how much detail Ms. Shupe gave to her setting.  It was obvious that she did her research and deftly applied it to her writing.  She talks about the disparity between the “old rich” (the people Elizabeth and her brother grew up with) and the “new rich” (Emmett and his family).  I love the fact that they alluded to the beginnings of the Metropolitan Opera House (the “new rich” built it after being denied entrance to The Academy of Music) and that the characters would talk about the need to please Caroline Astor (or as The History Chicks called her, “The” Mrs. Astor) and Alva Vanderbilt, who I googled and found the very picture that was used in my American History textbook to depict the excesses of the Gilded Age. 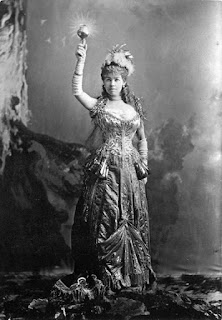 My favorite piece of history included in this book was The Great Blizzard of 1888, which buried New York City as well as Brooklyn, which was not a part of the city at the time (it only became incorporated into the five borough system in 1896) in 50 inches of snow and plunged the citizens of those two cities into sub-zero temperatures.  While I was reading, I shared this article on the blizzard on the facebook page.  I found it an excellent account of what really happened and I thought it complemented the scenes in Magnate very well.  The one downside to reading the article after reading Ms. Shupe’s version is that it made me wonder how Elizabeth and Emmett would have fared had they actually been stuck in an abandoned office with little food and no electricity during the worst blizzard in New York City history.

There were a few things that bothered me about this book, no matter how much I liked it.  The biggest was the existence of Henry Rutlidge, who is only present in the book as a juxtaposition to Emmett.  Henry was everything Lizzie was supposed to want in a husband — he came from the same background as she did, was her best friend’s brother, and had grown up with her — and a large portion of the book involved Emmett being jealous of Lizzie’s relationship with Henry, even though she’d given him absolutely no reason for that jealousy.  Magnate would have worked equally well without him and we wouldn’t have had to deal with a vile scene in which he does something so awful that left no question as to whom Lizzie should pick.