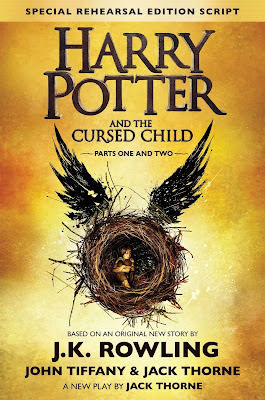 You don’t know how excited I am to have just finished the newest book in the Harry Potter series.  I spent last night at a local Barnes and Noble with friends. I’d never been to a Midnight Madness party before and it was definitely an interesting experience — adults dressed as Harry, Snape, and Newt Scamander (the girls in my group were very impressed with that guy)!

As soon as I got home, I downloaded my copy of The Cursed Child off of Amazon and got down to reading it.  All told, it took me about 3 hours to read it, the shortest amount of time it has ever taken me to get through a Potter adventure.

Forty year old Harry Potter, The Boy Who Lived, is all grown up, married to his school sweetheart, Ginny Weasley, and they have three children together.  While he’s good at his job with the Department of Magical Law Enforcement, he’s quite rubbish at the parenting thing.  Now, more than 20 years after defeating Voldemort in the Battle of Hogwarts, his son, Albus Serverus, is in danger, and Harry with some help from his friends must save his son from the same dark forces that have chased him his entire life.  More importantly, he needs to save his relationship with Albus because not doing so can doom them all.

“I open at the close.”  That is a phrase much used in the 7th Harry Potter novel and while it is never once uttered in the new play, it is very much still present.  The play opens with the HEA from the final book of the original series.  We meet Harry, Ginny, Ron, Hermione, and Draco (with their children) on Platform 9 3/4 as Harry and Ginny’s sons James and Albus Severus, Ron and Hermione’s daughter Rose, and Draco’s son Scorpius are heading off to Hogwarts — all but James are going for the first time.

In The Deathly Hallows this scene is a bit saccharine and I know most fans thought it to be superfluous.  Here, while it is almost the same scene, we get to see a little bit more and it does a good job of setting up the rest of the storyline.

For the most part, The Cursed Child is about fathers and their children.  We get an interesting look at how Harry and Draco are as fathers and how their pasts play into the way they live in the present.  I immensely enjoyed the scenes between these two former enemies — there is even a wizard’s duel in the middle of Harry and Ginny’s house — because when you spend your entire childhood and early adulthood as enemies, it is hard to forgive and forget.  This too plays a big part of the narrative.

The story as a whole is engaging and the format in which it is in is probably the best one for it.  While it would still be just as interesting if it was formatted the same way all the others are, there are aspects of it that I don’t think would have played as well.  To borrow a phrase from another British staple, The Cursed Child, is very “timey-wimey.”  Yes, there was some time travel in The Prisoner of Azkaban, but that was small potatoes compared to what goes on in The Cursed Child.  A good portion of the narrative takes place in the past, melding the world of the near future (it takes place in Albus’s 4th year, so 3 years after the first scene on Platform 9 3/4) with the past.  It was interesting to see what small changes to the past would do to the future and in that way it is very loyal to the original seven books.  Change one thing in the past and completely rewrite the present.

The play isn’t perfect — I would have preferred there to be more for Ron to do than what he was given, but for the most part, it is clever and induces enough nostalgia for the original series to keep all Potter-philes happy for a while.

I find myself wishing that I hadn’t finished it so quickly, but that isn’t a new sensation when it comes to anything Potter related.  There are rumors that a production of the play might be opening on Broadway by the end of next year.  I hope this is true and I hope that it will eventually end up in San Francisco, so I can go see it without having to fly to New York.