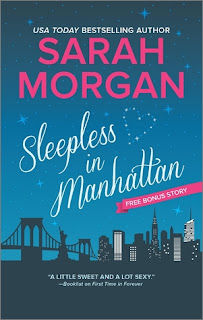 I bought this book with the intention of reading it on a plane from San Francisco to New York City last weekend.  Of course I read about 30% before even stepping foot onto the plane and once I was actually on it, I read maybe 5%, listening to the most recent Smart Bitches podcast and watching a few episodes of Charmed on Netflix because I had an awful night sleep the evening prior and was too tired to read.  I finally sat down to read it Sunday and Monday night.

Paige Walker has lived a sheltered life, brought low by a heart condition that had her in and out of the hospital until her late teens, but now in her late 20’s she’s finally healthy and happy.  She loves her life in Manhattan.  She’d felt stifled in her hometown of Puffin Island and as soon as she was able she moved to New York with her best friends, Eva and Frankie, as well as her older brother, Matt.  On the verge of a promotion at work, she figures she’s got it all, but then the rug is pulled out from under her and she’s forced to reevaluate her plans.

In walks Jake Romano, her brother’s best friend, a player, who broke Paige’s heart back when she was a teenager.  They’ve managed to remain friends, but she’s still in love with �him, coloring all of their encounters.  Jake knows exactly what buttons to push to get her to react, which is how he convinces her to open up her own event planning company.  Working closely with her, though, puts h�im in an awkward situation because he’s never forgotten t�hat night all those years ago when she offered him everything, forcing him to turn her down when it was the last thing that he wanted.

I’ve been trying to get my thought in order regarding this book.  There are many good things about it — things that I absolutely loved, but there are also some things that bother me about it.  That isn’t to say that it is a bad book because it is the furthest thing from a bad book.  I loved it.  I truly did just as I am sure most other people who have read it love it.

Ms. Morgan’s prose is outstanding, aside from the random British spelling of words like center, which briefly pulled me out of the story (not that she should change the way she write for an American audience, which is ludicrous), her writing sparkles with wit and pulls you in from the very first page.

The friendship between all of the main characters is so much fun.  They’ve created their own little community within the larger setting of New York City.  They have movie nights and regularly eat out together.  They’re very much a part of each others lives.  This obviously comes from their background growing up in a small town where everyone knows not just your name, but everything you’ve ever said and done.  Those of my readers that have lived in New York for any period of time know that this is not at all the case (and probably isn’t in any big city).  The town in which I spent my teens and most of my 20’s in likes to think of itself as a tight-knit community, but it isn’t.  My family and their neighbors have lived next door to each other for over a decade and we only just found ou�t the wife’s name last week.  Last week.  Another one of the neighbors never corrected my grandmother’s incorrect assumption that his name was Jorge (It is Charles, which is nowhere close to Jorge).

I also love the cover.  It makes New York look magical, a place where anything can happen (again, so not true).  The picture of it above doesn’t really do it justice — you really have to see it sitting on a shelf to truly appreciate it.  The week before I left for vacation, I came upon the paperback in a CVS next door to the European Wax Center and was tempted to pick up the paperback version.  (In the end, I decided to use some of my Amazon settlement money and left the paperback in the store.  I regret this, but more on that later).

The Good
I enjoyed the relationship between Paige and Jake.  Second chance romances are definitely my catnip, especially when the couple are also friends still, making it also a friends to lovers story, another one of my favorite tropes.  The only thing that kept this from being great was that there really wasn’t much of the romance.  We’re already half-way through with the book by the time it shows up at all and even then we don’t get much of it.  They’re both busy people and on top of that they keep the relationship a se�cret, so even when they’re together they’re not acting as a cou�ple.  Not everyone is in the dark, but an important part of their group is, so everyone has to pretend it is not happening, which is hardest on Jake mostly because this is the first time in his life that he’s in a relationship that is more important to him than anything else.
I also feel cheated by the secrecy aspect because we don’t get to see how the group’s dynamic changes based on Paige and Jake’s involvement — we’ll probably get a bit more of this in Sunset in Central Park, but if we’re being honest, we should have had that in this book.  Because Ms. Morgan has created a community out of these five characters, it is a shame that we don’t get this important part of their lives until almost the very end of the book.
I usually like the secret affair trope and it took me awhile to figure out why it did not work for me in this book.  My go-to secret affair is Monica and Chandler on Friends.  After they hooked up in London at the end of season 4, the entire first half of season five was about them hiding the relationship from their friends because they were afraid of what would happen once everyone found out.

For me, the reason it worked on Friends is because we had a whole season (and the rest of the series) to see how the relationship was going to change the dynamics.  From Joey’s “I gotta tell someone” to Phoebe’s “My eyes” and Ross’s “Get off my sister” (not to mention Rachel’s annoyance at not being told), we got everyone’s reaction and eventually saw how everyone knowing affected Monica and Chandler’s relationship: 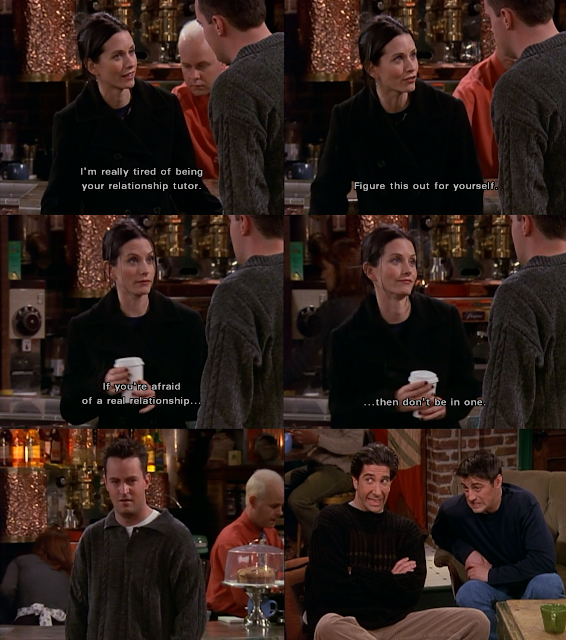 We don’t really get that here.  Sure, everyone finds out the big secret, but nothing really changes.  They are still friends and there is never a question about whether or not this would change that.  Yes, there are some recriminations, but that only lasts about one scene and then it is over.  It wouldn’t have even taken all that much to show this — another 50 pages or so and we would have gotten so much more out of this reveal.
The Bad
I almost cringed when typing that because there really isn’t anything “bad” about this book — just things that aren’t as good as other things.  The most egregious is the failure to address Jake’s relationship with the biological mother who abandoned him as a child.  This one event influences every single one of his actions later in life and warps his view of love, but it isn’t resolved at the end of the book.  There is a scene in which we’re shown Jake checking up on her, so it isn’t as if he didn’t know where she was.  I hate to say this, but it feels like this part of the story is unfinished because his feeling about what his mother did was never resolved.  A quick conversation in which his adoptive mother explains that his biological mother left because she didn’t think her love was enough doesn’t really cut it.
In a connected vein, Maria, the woman who raised him, is never referred to as his real mother, although in all respects she is — she loved him, took care of him, made sure he never wanted anything.  Apparently, this isn’t what makes someone a real parent.  Only biology does that.  I’m sure many adopted people wou�ld argue the contrary.
Finally, my last issue isn’t with the book itself, but with the way it is being sold.  As I mentioned above, I originally considered buying the paperback copy, but decided to get the e-book �instead, thinking there wouldn’t be a difference between the two.  However, that is not t�he case.  The physical book includes the novella Midnight at Tiffanys, a prequel to the rest of the From Manhattan with Love series, but the ebook does not.  Not only does it not come with the book, you actually have to pay for the digital copy (yes, it is only $2.99, but when there is only a penny difference between the price of the paperback and the ebook version of Sleepless in Manhattan, I shouldn’t have to pay $3 more for something that is more or less free to the people buying the paperback — shame on you Harlequin).
Conclusions
This was my first Sarah Morgan book and while I had a few issues with it, I fully intend to catch the rest of the series (I’m definitely looking forward to Sunset in Central Park (Eva and Matt’s book) — out in August, here in the US).  I will also download her Puffin Island series.  Even with the “bad” parts, Sleepless in Manhattan was better than many other books of its ilk.  If you’ve never read one of her books, give it a try.  I dare you not to like them.
4 Stars