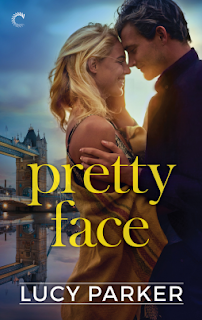 Pretty Face is pretty fucking awesome.  There, I said it.  I first picked it up based on all the squeeing about Ms. Parker’s first book, Act Like It, which I am sad to say, I still have not read, despite said squeeing.  I don’t usually read books by authors I know are British and I’m sure this comes from all those stuffy classics I had to read in high school.  Granted, many of those classics were written by American authors (I still have nightmares about reading Moby Dick–Mr Sullivan, if you are out there and have stumbled on my blog, I’m sorry, but Melville was an awful writer, who used the English language as a torture device), but still, there seems to be some type of block in my brain that stops me from wanting to read something by a British author.  I’m glad I made an exception for Ms. Parker.

Luc Savage is in the middle of a crisis: he can’t find anyone to play Elizabeth I in the new play that he is producing.  While he’s used to dealing with actors and casting, this time it is different–the play is set to open at his own theater, one that he has sunk his time and money into rebuilding, and if the play fails, his theater probably will too.  After being pressured by one of his financial backers to at least audition Lily Lamprey, star of a god-awful (in his opinion) soap opera, he is shocked to find that she has a voice made for porn–not the London theater scene.  However, if he doesn’t at least see this girl, he’s likely to lose his backer.  Giving in, he meets with Lily and sees something in her that he wasn’t expecting, his Elizabeth.

Lily Lamprey has always wanted to do theater, but ended up on one of Britain’s top rated soap operas instead.  While the show has helped get her foot in the door, she knows that people only see her as the highly sexed and manipulative Gloria.  She’s determined to prove everyone wrong and launch a successful career in the theater, but she’s got a couple of big problems: her pretty face and her sex kitten voice.  She already knows that Luc doesn’t take her seriously, but she needs this role to show the world that there is more to her than what they’ve seen on television.

Just a few years ago, I would not have read this book, and not just because of my antipathy towards British authors.  No, I wouldn’t have read this because of the age difference between the hero and heroine.  While it is never explicitly spelled out in the book, Luc is somewhere around 40.  Lily, on the other hand, is 26.  Anything more than a 10 year age difference seriously squicked me out when I was younger, and even now I have issues when there is a rather large age gap between two people.  What can someone pushing 50 have in common with someone young enough to be their child?  In my mind, nothing.  If a man in his 50’s is trolling for young girls, he is far from a catch and is probably looking for someone with whom to have sex and not an intelligent conversation.  Sure, that’s a generalization, but that’s how I feel.  Thankfully, Ms. Parker did a wonderful job of showing the similarities between Lily and Luc and how much those two were right for each other.  I loved the conversations they had and how they were almost always brutally honest with each other.  From the start, there are almost no secrets between the two, although the climax of the narrative does involve lies of omission. One thing that I loved about their relationship was how much Luc fought with himself over their ages.  He didn’t like to think of himself as someone who would rob the cradle, so to speak, especially since his older brother is going through a divorce with his child-bride (she was 19!).  There is a wonderful scene between the two of them when he realizes that Lily is more than just her age and sees her as someone he could love.

I also really enjoyed the interactions they had with other characters, especially the other members of the play, although I wish there were more of them.  At times, it seemed as if Luc and Lily lived inside of their own little bubble and the other characters only existed to move the plot along.  For instance, we are introduced to Lily’s roommate, Trix and Trix’s ex-boyfriend, Dan, both of whom show up at integral parts of the narrative only to disappear once they’ve played their roles.  The same can be said for Luc and Lily’s families.  I seriously wish these characters were more fleshed out and used as more than just plot devices.  Sadly, we can’t have everything that we want.  If we did, I’d be sitting on a private beach with Adam Levine.  Or maybe Jensen Ackles.  Oh, well.

I received a copy of this book for free through NetGalley in exchange for a fair and honest review.